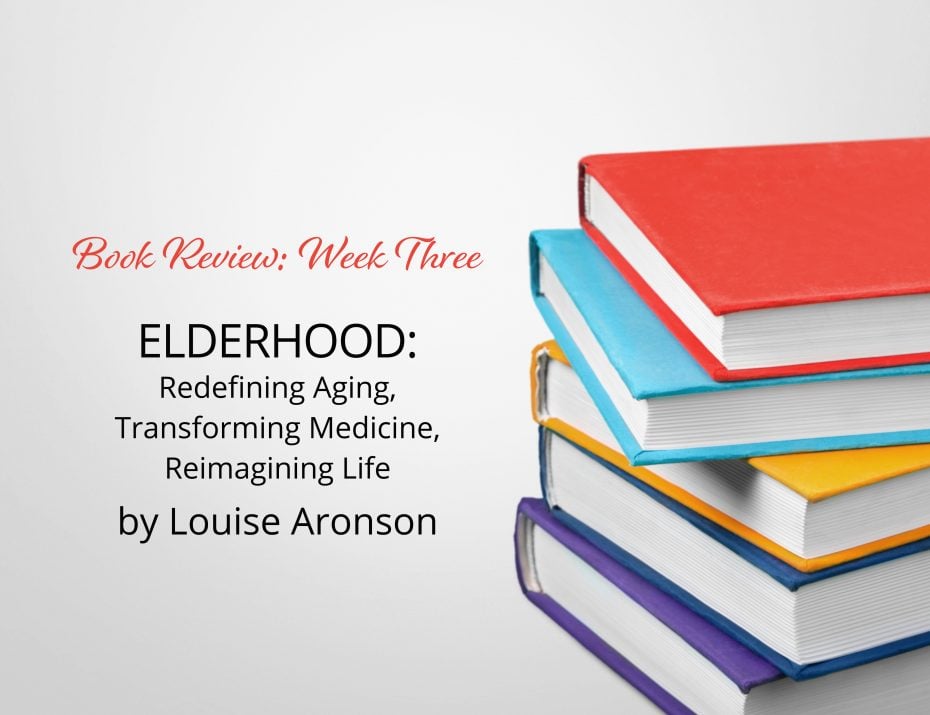 “Considering how old you are…” “If you were my father, I would…” “Given your age…” These are just three of the phrases my doctors use now when I have my annual checkups. I walk out of their examination rooms with a long list of don'ts, the feeling that I am wearing out and the sense that, from this point on, life is all downhill.

In a refreshing contrast, Harvard-trained geriatrician and award-winning author, Louise Aronson, offers a highly original definition of aging, full of empathy, knowledge, compassion and joy. Her book, "Elderhood,” provides a bold critique of our anti-aging society and of the medical care older adults receive. In the book, she includes vivid accounts of problems encountered by her patients in her medical practice. And she also offers her own challenges in learning about, and adapting to, the aging process.

“Elderhood” includes troubling case studies of patients who have suffered unnecessarily from misdiagnoses and missteps made by doctors unfamiliar with the unique conditions of aging. In "Elderhood," the author takes a close look at the medical-industrial complex. That complex sometimes makes life more difficult by manufacturing pill bottles that arthritic hands cannot open and by overprescribing drugs with debilitating side effects. She shares harrowing stories of malfeasance in older adult acute care, home healthcare and other older adult medical facilities.

Aronson criticizes our ageist society that looks upon aging as a disease, a condition to be dreaded, disparaged, denied and ignored. She specifically censures the medical community for its impersonal treatment protocols which fail patients 60 years old and older. “Growing old could be much more graceful if doctors would give it some attention,” she wrote. She examines the often invasive, painful and many times “futile or harmful” treatments the medical community uses to fight disease while giving little attention to overall well-being.

Aronson notes that in the hierarchy of medical specialties, geriatrics is low rated. Aronson observes that pediatricians and internists  provide care for children and adults through midlife. And she insists that patients in the last third of life need specialists too. She regrets that medical schools emphasize youthfulness and fail to provide adequate education for elder care.

Aronson purports that the third stage of life needs to be considered, not as a period of decline but as just another stage of life filled with challenges, opportunities and joys, like the first two stages. The author calls for a cultural re-examination of the meaning of aging and urges everyone to re-imagine our latter years in order to prepare and thrive during them.

After presenting this critical, knowledgeable and first-hand examination of the current state of medicine and aging, Aronson provides her own vision of aging.  She envisions elderhood as “neither nightmare nor Utopian fantasy" but a stage in life full of joy, wonder, frustration, outrage and hope. (To get the full picture, you will have to read the book.)

I do not like getting older. Although I see it and feel it, I try not to let aging stop me from living some of the most fulfilling, creative years of my life. This book, part memoir, part critique and part prescription, encourages readers to help put an end to the anti-aging industry and its profiteers. It imparts the reader to engage in better self-care and to collectively ask the medical community to not view elderhood as a disease. Instead, Aronson urges fellow physicians to see aging through multiple lenses, including the social, personal and wellness aspects of growing older. I recommend this book to anyone who, in the author’s own words, is “an aging, i.e., still-breathing human being.”

Louise Aronson, MD, is a geriatrician, educator and professor of medicine at the University of California in San Francisco. A graduate of Harvard Medical School and the MFA program for writers at Warren Wilson College, Dr. Aronson has received the Gold Professorship in Humanism, the California Home Care Physicians of the Year Award and the American Geriatrics Society Outstanding Mid-Career Clinical Educator of the Year Award in 2014. Her articles and stories have appeared in many publications including the New York Times, the New England Journal of Medicine, Lancet and Bellevue Literary Review. Bloomsbury Publishing is the producer of this 449-page book, which includes detailed notes, an extensive bibliography and a comprehensive index.

William Schwab received his Bachelor of Arts degree from the University of Cincinnati, along with Master of Divinity and Doctor of Ministry degrees from Eden Theological Seminary, Webster Groves, Missouri. He is a retired United Church of Christ pastor who served churches in O'Fallon and Washington, Missouri, for a total of 33 years and was a judicatory official for the Missouri Mid-South Conference for six years. He is currently a community volunteer, moderating a book club on American culture topics, and leading two eight-week sessions on U.S. foreign policy at the Washington Public Library. Schwab also volunteers at Shaw Nature Reserve, a division of the Missouri Botanical Gardens, where he collects and propagates seeds and assists with research on Missouri native plants. He lives with his wife, Diane, in Washington, Missouri.

View all articles by Bill Schwab