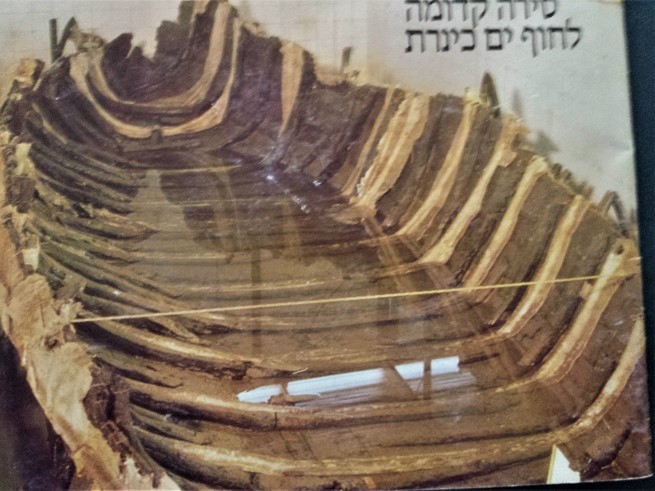 An international conference. Bagels and wine on the beach. A muddy boat. Polyurethane. Kibbutz. Popsicles before lunch. A song.

In 1986, Jerusalem, Israel, hosted an international forum awkwardly titled as a symposium regarding the treatment of maladjusted children. Representatives of mid-west USA residential centers for troubled children were among the delegates from a dozen nations.

We spent five days struggling through lectures and discussions via simultaneous translation services (long before translation earbuds were a thing!). It was a relief when we could begin another five days for touring Israel.

For two nights we were lodged at Nof Ginosar Hotel on the shore of the Sea of Galilee. My roommate was a high-energy Jesuit chaplain from one of the residential centers back home. We were fascinated by the notion that Jesus may have walked on this beach 2000 years earlier. We decided to craft a worship service for the US group in order to capture the awesomeness of that possibility.

Bagels and Wine on the Beach

Our group gathered in the early morning. We setup borrowed hotel lounge chairs in a circle. My winsome companion begged bagels, a little wine, and small paper cups from the resort kitchen. In our multi-faith liturgy of sorts, we engaged the group in speculation that Jesus may well have walked, taught and prayed along these sandy and rocky places, in the wildernesses and gardens we visited, in the marketplaces and along the via dolorosa. We communed together to the music of gentle lapping waves on the Galilean beach.

Months before our visit, severe drought conditions dramatically lowered the sea level leaving a broad expanse of muddy shallows. Two amateur explorers found the most significant archaeological discovery of the century, near that Nof Ginosar beach.

It appeared to be a boat buried deep in mud, perhaps not seen since it sank hundreds of years before. Carefully they traced the outline of the sunken vessel. Archaeologists with expertise in under water exploration arrived quickly. As mud and sand were meticulously brushed aside, they slowly uncovered a water-soaked vessel. Radiocarbon testing confirmed that it was like fishing boats used on the Sea of Galilee “before the common era” (BCE formerly known as B.C. years) into the early “common era years” (CE formerly known as A.D.).

Typical excavation of such treasures requires months of painstaking effort. But heavy rains, storms, and snow melt were expected to raise the sea level and again flood the area. Vandals acting on rumors that the boat carried gold threatened the safety of the site. 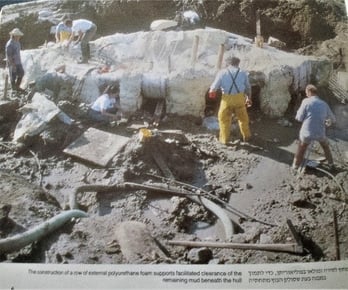 So, in twelve days experts and volunteers dug out an ancient fishing boat eventually dubbed by some as “the Jesus boat” and later by those who discovered it, “the boat of peace.” To prevent the water-soaked wood from deteriorating in the air which it had not seen for a couple thousand years, polyurethane foam and other coverings were wrapped over the vessel, it was freed from its muddy grave, and floated to a more secure part of the beach. Special foams were injected into the wood to slowly drive out the water so the structure could be preserved.

This YouTube link provides a fascinating look at the recovery of the boat of peace.”

That was the same year our tour group communed on the sands of the Nof Ginosar Hotel. By then the boat was securely sheltered in an atmosphere-controlled enclosure, coated with wax and polyurethane. It would take most of a dozen years to extract all the moisture from the soaked wooden planks to prevent their deterioration.

That was thirty-six years after I learned the solo.

Kibbutz and Popsicles before lunch

Ten years later, I was again in Israel. This time to spend three weeks on an archaeological dig at Bethsaida. Our crew was housed and fed – did you guess where? – in the dorms of Kibbutz Nof Ginosar!

We started work each day by 5 a.m. to avoid extreme mid-day heat. Even by 10 a.m. we were dehydrated. From our perch high up in the ruins of Bethsaida we cheered as a truck driven by the teenage daughter of our dig director brought popsicles to cool us off enough so we could finish the eight-hour morning excavation.

In the afternoons, back at the kibbutz, we walked through basement tunnels of a newly constructed museum on our way to clean, inspect and learn about the shards we had uncovered. There we passed buckets of wax and piles of wrappings painstakingly removed from the “the boat of peace” as workers prepared it for eventual public viewing in the museum above us.

Even as weary and overheated as we diggers were, as we glanced at the boat in its controlled no-admittance shelter, we moved in somber quietness as we imagined the adventures that this ancient fishing boat represented.

When I learned it as a teenager, the poem by Daniel Twohig set to music of Geoffrey O’Hara was just a solo for a church service:

“I walked today where Jesus walked,

In days of long ago;

I wandered down each path He knew,

With reverent step and slow.

Those little lanes they have not changed—

Thirty-six years before a convocation of child care professionals in Jerusalem and communion on the beach; forty-six years before a dig in Bethsaida with a popsicle break at ten in the morning, souvenir shards, and lodging on the shores of the Sea of Galilee, I learned a solo about walking where Jesus walked.

At Kibbutz Nof Ginsoar that song blossomed into a precious musical memory of a sacred journey.

“I walked today where Jesus walked

And felt Him close to me!”