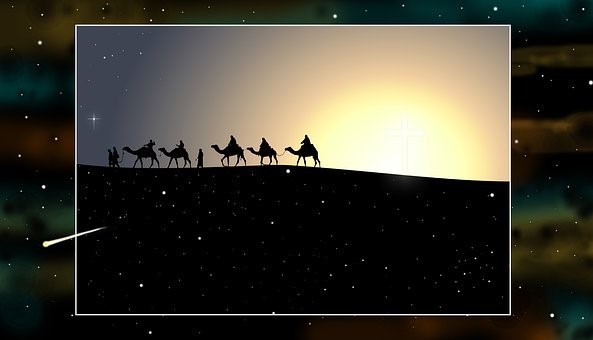 One year ago this day, January 6, 2021, this blog’s writers were scheduled for a zoom planning meeting at 3:00. As news from the events unfolding in Washington DC began to spread across the airwaves, I received a couple of messages wondering if we should just reschedule the meeting. I knew that I didn’t want to be alone in my home office and invited them to join me anyway, knowing that we were not going to be working on a writing schedule.

What a gift to be with these colleagues from our homes in Michigan, Indiana and Ohio. We each simultaneously watched news reports from different channels and sat together processing what the images were revealing. Since that day, the date, January 6th, has taken on a very contemptuous and dangerous tone—unlike my previous emotional and ritual ties to this holy day, otherwise known as Epiphany.

Epiphany
For those of us in the Christian tradition, Epiphany is the celebration of the story when the wise ones finally made their way to worship the newborn king. They travelled from great distances by following a great light in the night sky. There is far more folklore about this encounter than there are facts or details revealed in the scriptures.

What we are told in the gospel of Matthew 2:1-23 is that they stopped in Jerusalem and asked Herod where they could find the child who had been born king of the Jews. Herod’s informants told him that the Messiah was to be from Bethlehem and asked them when the star had appeared. With that information, Herod sent them on their way.
The wise royal travelers followed the star once again until it led them to the house where Mary and her child were. They opened their treasure chests and offered gold, frankincense and myrrh. In the eastern Christian churches, the gift-giving of the season happens on this day (and not on December 25) in the manor of the gifts brought by the wise ones.
But then, thanks to a warning in their dreams, the royal visitors returned to their country by another road so as to avoid Herod.

The part of the story that we often forget to tell, or intentionally leave out because it is not about light but a more sinister and dangerous event, is what followed after that royal visit. It was revealed to Joseph in a dream that he needed to take Mary and the newborn to Egypt. They became refugees seeking safety from another country. We find out that after they had left, Herod ordered a massacre of children who would have been born during the time that the star led the Wise ones to Judea. It was not until after the death of Herod that Joseph, Mary and Jesus returned to Nazareth.

So, what do we do with this day which celebrates the light of revelations and also foreshadows the violence and death that can come from fear and the desire to control power over others? How do we balance these realities at work even in the world today?

Illumination
In the coming month, the bloggers are going to lift up sources of inspiration in their own lives. We begin here in January with Books that Illuminate.

One of the most spiritually nourishing courses I took in seminary over 35 years ago, centered on the works of Howard Thurman, Zora Neale Thurston and Alice Walker. These African American writers each opened me to their own experiences of the power of the light shining in the midst of dangerous and turbulent realities.

Of particular, I want to lift up to you Howard Thurman. I have returned again and again to his words as sources of inspiration when I have needed to be reminded of the power of the divine in this world.

I will not try to summarize Thurman’s life, but invite you to explore his autobiography, With Head and Heart: The Autobiography of Howard Thurman. But just a few pieces to whet your appetite to read further: His visit with Mahatma Gandhi in 1935 made a profound impact on him and his faith and helped to cement his understanding and commitment to non-violence. In 1944 he was co-founder of the first multi-racial congregation in the U.S., Church for the Fellowship of All Peoples, in San Francisco, through the Fellowship of Reconciliation. Later he served as the dean of Marsh Chapel at Boston University becoming the first black dean of a chapel at a majority-white university in the U.S. And it is said that Martin Luther King Jr. carried two books with him—the bible and Thurman’s Jesus and the Disinherited. Thurman authored about 20 books.

I would like to share one of his reflections from Meditations of the Heart (p. 189-190, Harper and Row, 1953). These words come as prayer or testament that any of us could use on this day which represents the power of light in creation. Light to lead us to the divine even in the face of the realities and ugliness that come as we wrestle with what is true.
The formatting is mine as I find it easier to linger on the words and not rush on to the sentence that follows. On this Epiphany and Insurrection Anniversary, may we all seek truth and light.

29. I Seek Truth and Light
I will keep my heart open to truth and light.

I will keep my heart open this day to all things that commend themselves to me as truth.
I will try to increase my sensitiveness to error that it may not enter my heart with its distortions and its falseness.
This is not easy.
I am never free from the possibility of being mistaken.
Deep within myself I will be still, that I may be guided and wisened by the spirit of God.
In my own way, I will work out little tests by which I may discern truth from error.
Error may center my mind and heart in many disguises, this I know.
My anxieties, my fears, my ambitions, even my hopes and my dreams may deceive me into calling truth, error; And error, truth.
Always I will seek the honesty and integrity that God yields to those who lay bare their lives constantly before Him.

I will keep my heart open to light.
There are times when the light burns, when it is too bright, or when it is too revealing.
Somehow, I must accustom myself to the light and learn to look with steadiness at all that it discloses.
I will not yield to the temptation to regard the light in me as being all the light there is.
Always I will seek to let my steps be guided by such light as I have at any particular moment.
Even in darkness I will learn to wait for the light, confident that it will come to cast its shadow across my path at the point of my greatest and most tragic need.
Because God is the God of the darkness as well as the light,
I shall be unafraid of the darkness.

I will keep my heart open to truth and light.