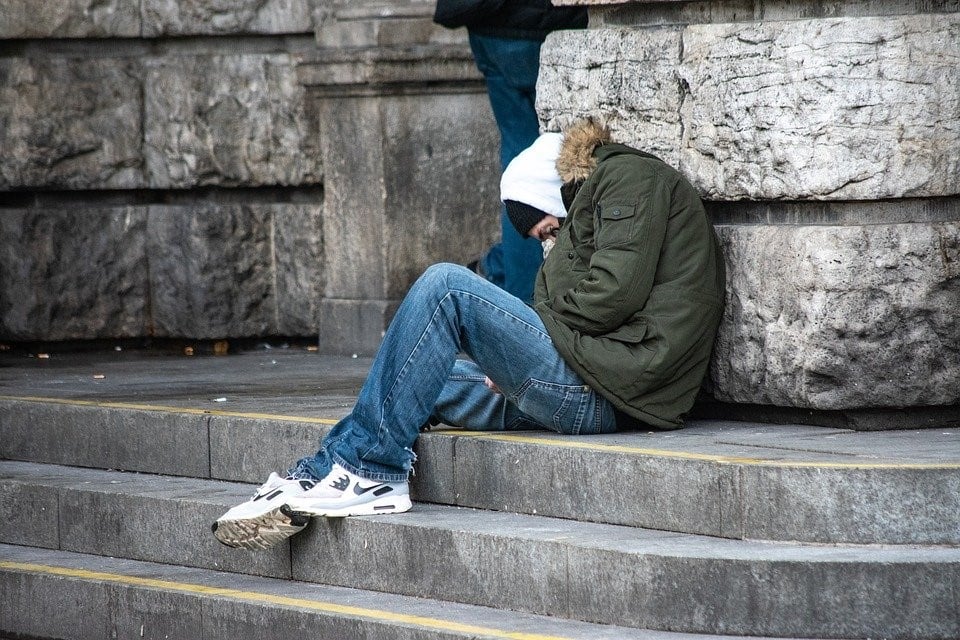 My all-time favorite Christmas hymn is “O Little Town of Bethlehem,” and the poem by Phillips Brooks. I stood in awe and delight when I spotted his statue in Copley Square.

It was a weekend between two back-to-back conferences in Boston. I had time to wander between the two events. There it was, in the corner of the magnificent architectural treasure known as Trinity Episcopal Church. Brooks was once the rector at Trinity. The congregation funded the sculpture to honor of one of their more famous, justice active pastors.

After gawking like the tourist I was, I headed for the front door of the church. Unnoticed until then were the encampments on the steps leading into the sanctuary of this cathedral-like building.

Homeless folks reclined on their bed rolls; some sat listlessly with heads in their hands, their belongings piled for safekeeping between their feet. As I approached, the double wide church doors opened and two ushers came out to the steps.

A goodly number of the loiterers stood and gathered their things when the courteous ushers invited them inside for worship time. Each one got a handshake and a friendly pat on the back as they wandered down the aisles to a place to sit.

I followed them but I had to do some of zig zagging to pass those who remained on the steps.

I don’t remember much about the worship service. But I have always remembered the service of another kind. Gentle women in their Sunday best hats, and well-suited-up gentlemen escorted their guests through the hallway after worship to fellowship hall for coffee, donuts and whatever else was available that morning. With arms around the shoulders of their less well-coifed guests, there was pleasant chatter like one hears among friends, and very many smiles.

It was an exquisite display of hospitality long before the congregations we hear today declaring that all are welcome, no matter who or what or how they are.

Members of Trinity Church lived out the words of the Phillips Brooks’ hymn (as in this contemporary version) “…God imparts to human hearts the glorious love of heaven; No one discerns God’s coming, but in this world of sin, where yearning souls long to be whole, the dear Christ enters in.”

I returned to my hotel with prayers that many congregations would be copy cats. So many have done so, indeed, with goals, mission statements and core values devoted to community outreach.

Twenty years later, our Conference Minister was asked what opportunities were in place to assist families in communities ravaged by floods and mud, hail and wind gales. He replied, “whatever you want to make of it.” His reply provoked the development of a disaster response planning team, the recruitment of hundreds of volunteers over several years, and the rehabilitation of housing in some of the poorest counties in Kentucky and West Virginia.

Youth and their older friends from congregations throughout the conference and neighboring areas, contributed their vacation time or took time off from work, paid their own expenses, spent hours on the road to arrive at work camp destinations in areas far off the usual tourist routes, and worked from early morning sometimes well into the evening, to fix what nature’s ravages and poverty destroyed.

The story you can read here is a recent sample of such servant outreach.

When teenage helpers were interviewed, they revealed personal feelings of being blessed by opportunity to do something worthwhile for others. Their more seasoned grownup companions often commented that of course food banks and thrift shops are vitally important, but rebuilding homes felt like a long lasting benefit. As one leader expressed it, “When we return home, we will leave housing that is sanitary, secure, and safe.”

Homeowners often worked alongside the visiting volunteers, or if unable to because of age or disability or jobs outside the home, they provided snacks and even lunches for the workers. At the end of a work week, they unfailingly remarked not only how grateful they were for the help, but how much hope and peace now marked their days.

Benefits abounded. Volunteers felt like good stewards of their time, energies and resources. Their reward, they said, was to have new friends. Residents, victims of adverse circumstances, felt blessed by repaired houses, but also rejoiced that they were no longer “out of sight, out of mind” in communities deep in the valleys of Appalachia.

Perhaps both stories, the one in Copley Square and the work camps in Appalachia, are images of harvest. The benefits of agricultural harvests extend widely. The farmer recovers the costs of machinery, seed, and labor (hopefully!). The users of the harvested crops eat well, and benefit in so many other ways.

You perhaps have noticed that many poems and songs about harvest time lift up corn and beans, wheat and grapes. Remember Rogers and Hammerstein’s score for the musical Oklahoma? “…the corn is as high as an elephant’s eye, an’ it looks like it’s climbing clear up to the sky!”

The reaping of sky-high corn prompted the Rev. Dr. William Beal, Rector of Brooke, Norfolk, to introduce an end-of-the-harvest-season festival on September 8, 1854, 167 years before this September article is published.

Dr. Beal was annoyed that the completion of harvest was celebrated by rowdy parties of relief that the work of harvesting was done for the season. Instead he encouraged his community to express thanks that the harvest was bountiful. His legacy lives in the thanksgiving celebrations in many other villages throughout Norfolk.

Eugene Peterson neatly offers this advice when he paraphrases John 4:34-35: “As you look around right now, wouldn’t you say that in about four months it will be time to harvest? Well, I’m telling you to open your eyes and take a good look at what’s right in front of you. These … fields are ripe. It’s harvest time!”

Even in these times of distress, dissension, distrust and abusive discourse, the fields are ripe with blessings to celebrate!

Remember, though, before there can be a harvest, seeds have to be planted. Our privilege is to plant seeds of compassion and justice, courage, love, and hope.

Sow the seeds, nurture what grows from them, and rejoice in a harvest of blessings!