By Rev. Beth Long-Higgins, VP of Engagement and director of the Ruth Frost Parker Center for Abundant Aging  •  April 28, 2022 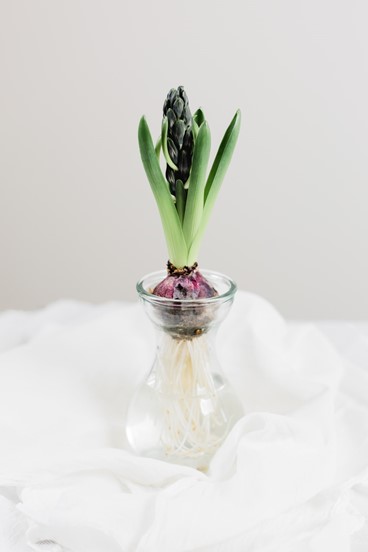 One of these stories happens to a couple as they left Jerusalem and headed home (Luke 24:13-35). They processed the events creating a timeline of the past days. They were fitting the pieces of the drama together—their own experience and the witness of others who had been present during the Passover observances in the holy city.

But they couldn’t yet see or make sense of all that had happened. Not until after the three had walked together. Not until after the couple recounted the events with the unknown fellow traveler. When the stranger came and interpreted the teachings of Moses and the prophets, they still could not make the connection. He continued to interpret things from the scripture about the Messiah. And yet, they did not know him, but invited him into their home as night was falling.

One of my favorite hymns (and one which I have let my loved ones know is to be included in my own memorial service) is “In the Bulb There is a Flower” by Natalie Sleeth. The concluding phrase at the end of each line is: “Unrevealed until its season, something God alone can see.” The flower is in the bulb. The apple tree is in the seed. The silence gives birth to song. From the past comes the future, even if it is still a mystery to those of us in the moment. In our doubt is believing. And in death a resurrection. All of which is to say that we shouldn’t be surprised that we all experience moments of not seeing, not knowing, not understanding the deeper significance of life’s events.

After the three travelers on the road to Emmaus were at the table together, the stranger took the bread, blessed and broke it and gave it them. Then. Finally, then. The recognition caused the burning inside them—the excitement of knowing and being in what they knew was a holy moment. “Their eyes were opened” at about the same time Christ left them.

How often have we similarly come to moments of “recognizing” the holy threads of connection which link us from the past to the present? When have we observed that one encounter with a stranger helped to change the way we saw the world? When have we looked back and realized that our own hearts had been burning? What are the signs and actions that help to open our own eyes?

One of the books which I frequently consult is Composing a Further Life: The Age of Active Wisdom by Mary Catherine Bateson. She observes that we have the opportunity to live a “new longevity” when health and vitality are present but before significant decline only near the end of life. She contends that we call this later life as the stage of Active Wisdom.

Wisdom for Bateson involves learning and teaching. It employs the ability “to recall the past and plan for the future”. It comes from a lifetime of experiences. And it involves “drawing connections and finding similarities, looking for underlying patterns”. (p. 234)

Isn’t that the story of the conversation and encounter on the road to Emmaus? Each of them recalled the past. The couple had been wrestling, as was undoubtedly everyone else, with reconciling what they thought the future would hold next to the reality of what actually happened. They had sincere expectations of what the Messiah was to bring to the world. They had imagined a whole set of changes that should have happened. The execution of Jesus had not been a part of their understanding. And with his death, those future plans appeared to be shattered.

In the retelling of the events of the previous days and in Christ’s interpreting the scriptures, they were offered the opportunity to reflect. Through simple actions, which have become sacrament for us, around the table, they were able to see the connections between past and present. In the company of the stranger, in the patterns of speech and feeling the bond with this man, their future was opened anew.

In spite of the fact that they had just travelled most of the day from Jerusalem to their home, once their eyes were opened, they could not contain their joy. That very hour after Christ left them, they headed back to Jerusalem on foot again, to share their experience with the disciples.

Perhaps the season of Easter is an invitation for us to engage in the practices of Active Wisdom. What are the expectations for the future which we once held that might not be what we are actually experiencing? Where are the patterns woven throughout our lives that continue to offer us deeper insight in our relationship with our creator? How can we engage in practices that actively encourage our own deepening wisdom building?

In this season of spring as new life bursts into the world, may we be aware of the energy around us. May our hearts have opportunity to burn with the recognition of the holy. And may we have the stamina to travel further than we had expected so we can give witness and tell the story of life’s blessings. Wise ones, courage to you on your journey as your eyes are continually opened to the awareness of God’s presence in your life.

Rev. Beth Long-Higgins is the VP of Engagement and director of the Ruth Frost Parker Center for Abundant Aging with United Church Homes. She is an ordained minister in the United Church of Christ, musician, amateur birder and fiber artist. Travel with her spouse, Dave, to visit their adult children and beyond brings her great joy.

View all articles by Rev. Beth Long-Higgins, VP of Engagement and director of the Ruth Frost Parker Center for Abundant Aging