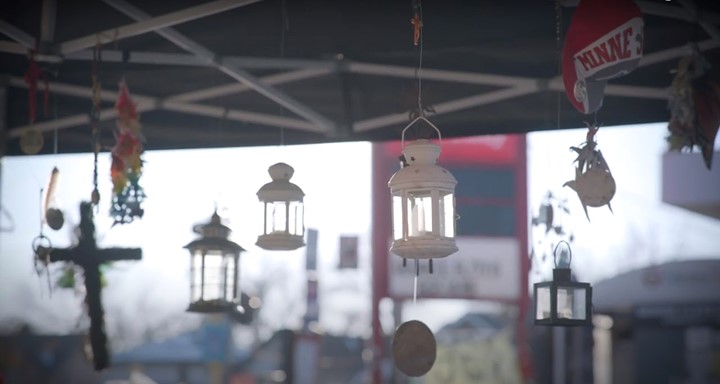 So Joshua fought the Amalekites as Moses had ordered, and Moses, Aaron and Hur went to the top of the hill. As long as Moses held up his hands, the Israelites were winning, but whenever he lowered his hands, the Amalekites were winning. But Moses’ hands grew weary; so they took a stone and put it under him and he sat on it. Aaron and Hur held up his hands—one on one side, one on the other—so that his hands remained steady till sunset.
~ Exodus 17:10-12

Faithful to God, Moses led his people from bondage into the wilderness of freedom. Yet, once freed, the people hungered.

Faithful to God, Moses led his people from hunger into a rain of bread from heaven. Still, once fed, the people thirsted.

Faithful to God, Moses led his people from thirst into a desert where water pours from rock. Even so, once quenched, the people quarreled.

Faithful to God, Moses cries out nonetheless, “What shall I do with this people?” Needful still, the people cry out yet again, “Is the Lord among us or not?”

And there, standing for his people once more, Moses simply can’t do it any longer. The Word says Moses’ hands grew weary. In the words of Martin Luther King, Jr’s favorite gospel song, he was tired, he was weak, he was worn. Faithful though he surely was, Moses could stand no more.

So his brothers pull up a stone for him to sit on. They move to his side. They lift his weary hands to God.

When he could stand no more, they stood with.

~
In an exceptionally impactful episode of the podcast This American Life (Episode 738: Good Grief! https://www.thisamericanlife.org/738/transcript) producer Bim Adewunmi speaks with racial justice activist Jeanelle Austin, who began tending the spontaneously erupting memorial at the intersection of 38th Street and Chicago Avenue in Minneapolis, where George Floyd was murdered by police on May 25, 2020. Traveling from out of state to join in the protests, Ms. Austin tells of her response to almost being run down by a counter-protester:

The next morning, I said, yep, we're not going to do that. I was like, I'm just going to do something more simple, but still profound, by keeping the memorial clean. And so I started waking up at 6:00 AM, June 1st, and started tending to the memorial. And I decided that that would be my protest.

She then describes some of what unfolded for her with that decision:

I saw people grieving. And I saw that because I was there, many of them would just tap me on my shoulder and say, hey, can I talk? Or one person pulled up a whole lawn chair and was like, I am going to hold you hostage because you're there cutting plants, and I need somebody to talk to. Or some people just would come and just stand by me and say nothing. But because I was there, they just needed to be.

Ms. Austin remains the lead caretaker of the memorial, where she “guides a team of volunteers to stand in the unique space of preservation and protest.” She speaks of tending this place of outrage and grief as a form of social resistance and self-care. When it became too much to stand, she pulled up a stone to hold space in the midst of it all. She moved to the peoples’ sides. She held weary hands.

Where they could stand no more, she stood with.

~
A very short time ago I sat with a woman who serves ever so quietly in the senior community where I work. She moves so gently and attentively through this place that in some ways you might hardly notice she is there. Until you do. And then you would realize you see her everywhere: serving meals in the dining room, guiding the devout but unsteady to Catholic services, sitting with an inconsolable elder, drawing near in their wash of confusion and sadness.

As we sit, I learn of how she thinks often of her parents, now deceased, as she spends time in our memory care neighborhood. She speaks, ever quietly, of her love for them - her parents, and those too in whom she sometimes sees their gaze, feels their warmth. I hear of her time spent each week with a bed-bound woman who, though she declines chaplain visits, welcomes my friend and even speaks with her about God. What do you do when you visit her? I ask. My quiet friend tells me Nothing, really. I sit with her, mostly. Just sit with her. I marvel as I think of this, how this gentle woman comes every weekend to sit bedside with a stranger in silence. No one should be alone like this. She continues shyly, I just do what the Lord leads me to do …

She is, I thought, as invisible and as luminous as light. Words from my spiritual mentor from years ago come to mind, be transparent for the Presence of Christ. In this place full of our society’s “invisible people,” she too becomes invisible - transparent and luminous as Christ. Though she would be astonished to find herself here in these words, I am learning the way of Light in her presence.

When it becomes too much to stand, she pulls up a chair alongside. She holds weary hands. She lifts them up to God.

Where they can stand no more, she stands with.

~
As I write these final words, Ukraine is losing ground to Russia, the January 6 hearings are revealing the shocking uncertainties of the future of our democracy, and Black and Brown and Asian peoples continue to be under siege as the voices and violence of White supremacy surge. The pandemic continues, the Supreme Court has overturned Roe v. Wade, and gun violence is killing people everywhere. Everywhere. And faithful though we are, so many of us are finding our praying protesting and persevering hands are oh so weary.

Yet though it surely is too much to stand, we can pull up a stone or a chair alongside. Hold one another’s weary hands. And lift them up to God.

When we can stand no more, may we stand with.
Steady until the sun sets.

Kristen Orion was ordained in 1999 on Pentecost in New York City. Her pastoral service began when she was installed to service on September 11th, 2001, ministering in the wake of the tragic day. She spent the next twenty years serving an array of people on many spiritual paths. Kristen has most recently been serving as a hospice chaplain, until she relocated to be closer to loved ones. She is married to Asa and they have a home in the country. Kristen is thrilled to be Chaplain at Pilgrim Manor and sharing in life and community together.