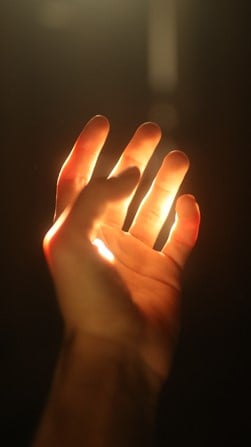 It started out as a thought - an unspoken idea: “An inquiry into the meaning of the words, ‘Spiritual Healing’”.  It came out of my life as a psychologist where we talked about ways to live a more fulfilling, productive life.  It was the centerpiece of my life as a minister, when we talked about the reality of God in the healing process.

The more I thought about those words, the more I was drawn to the idea of doing a small study on the meaning of spiritual healing in the greater Chicago area where I lived.  When God and life came together for me, my spirit was awakened.  Healing happened when my life was thoroughly changed.

But at that time in the mid 1990’s, the focus in the denomination to which I am connected was much more deeply concerned with social actions that would enable all people to live productive and useful lives.  My small research study on spiritual healing didn’t fit their criteria for an important area of study.

But that did not deter God from testing out the idea.  It had already begun to take form and shape in my life.  And, more importantly, the idea had acquired a name:  “The Spiritual Healing Project” which acted as a powerful catalyst for action.  Our totally unexpected journey had already begun.

A letter of invitation was sent to those one hundred churches introducing the study and who we were.  In less than two weeks, ninety-six of our one hundred churches returned a resounding “Yes” to our invitation.  Some said, “How fast can you get here?”  Others added, “How long will you stay?”  We had clearly touched an important issue and people were anxious to continue the dialogue.

Four more churches heard about our study and asked to be included.  We closed our sample with one hundred churches, literally located all across the U.S. and fully representative of all the diversity in our denomination.

Then we began to try to create an action plan:  How was I going to get around the country with this study while I was engaged as a psychologist in private practice, and we were the parents of five children in a blended family and a beginning group of grandchildren.  I invited my husband, Lewis Musil, (an educator, not a minister) to share the journey.  Our grandchildren re-named the study, “Gramma’s crazy mission”.

The study entered our hearts, minds and spirits and we never looked back.  God was our constant traveling companion, and this was clearly God’s study.  We knew we were not alone.  Our journey began in 1996 in Chicago, in an African American church which provided a table of food and powerful stories of spiritual healing. They sent us on to our second church in St. Louis, Missouri, blessing us and our work as we left.

We continued to work our way through the country, taking two years to visit our one hundred churches in our “spare” time.  We completed our study in 1998 in Vero Beach Florida.  By that time, we had absolute and powerful statistical evidence both of the existence of God and the power and meaning of Spiritual Healing.

Over two thousand people had talked to us about God.  They described a God experience as a time when they became aware of the Presence and Action of God in their lives which were defined as those moments when God became “REAL” for them.

But it was the hundreds of shared stories; the tears shed and the power of Spirit to transform lives that kept repeating the themes:  God is Here; God is Now; God is Everywhere with Everyone.  No exceptions.

Our stories always focused on the theme of “new life”.  Invited or not invited, God had entered people’s lives and changed them.  People were always free to acknowledge God’s Presence or to ignore God’s invitation to explore new life options. But we also learned that God’s “other name” was always Surprise!

Two constants emerged almost immediately.  First, people had experiences they were willing to call the presence or action of God in their lives.  Second, they rarely shared those stories for fear of being seen as weird, crazy or too religious.  But they never forgot them.  We came to their churches, called by God to listen, and that allowed these marvelous God stories to pour out of the hearts and tears of everyone who participated in the study.

We were deeply interested students who completed the study as profoundly moved disciples of an ever-present God waiting to be discovered and known.  Our new spiritual language was the story of our experiences with God.  As the participants shared their God-stories we were developing our own God journal based on our own experiences of God’s Presence in our lives.

As God observers, we looked for God’s Presence everywhere.  As we shared what we were learning, we heard more God stories.  It became a new ministry for me as we formed groups to share God moments and prayers in a small group setting.  Our lives became infused with God Moments everywhere.

Our Unexpected Journey had permanently and totally transformed each of our lives.  We were deeply and profoundly moved by hundreds of moments when God became “real” for us.  My ministry became focused on this deeply present God in the world.  And Spiritual Life became the setting into which all these stories belonged.

The summary of our unexpected journey is powerful and simple:

GOD IS REAL.
GOD IS AVAILABLE TO ALL PEOPLE EVERYWHERE.
GOD IS REACHABLE THROUGH THE HEART AND THE M1IND AND THE SPIRIT.

AND GOD’S OTHER NAME REALLY IS: “SURPRISE”!

The Reverend Bobbie McKay, Ph.D. is an ordained minister in the United Church of Christ and a licensed psychologist. She has completed a very large research study on “Spiritual Life in Mainstream Interfaith Congregations” with over 3000 participants in the study. From that extensive study, she created the “Spiritual Life Team Program” which enables people to identify and share their spiritual lives in a small group, non-psychologically oriented, setting. The groups have been 100% successful in enabling people to identify and share their spiritual lives. Dr. McKay is the minister of Spiritual Life at the Glenview Community Church. She celebrated her 50th anniversary of ordination in 2020. Dr. McKay was married to Lewis Musil who died in 2019. She has seven grandchildren and two great grandchildren!